Saying Goodbye: The Story of Gus 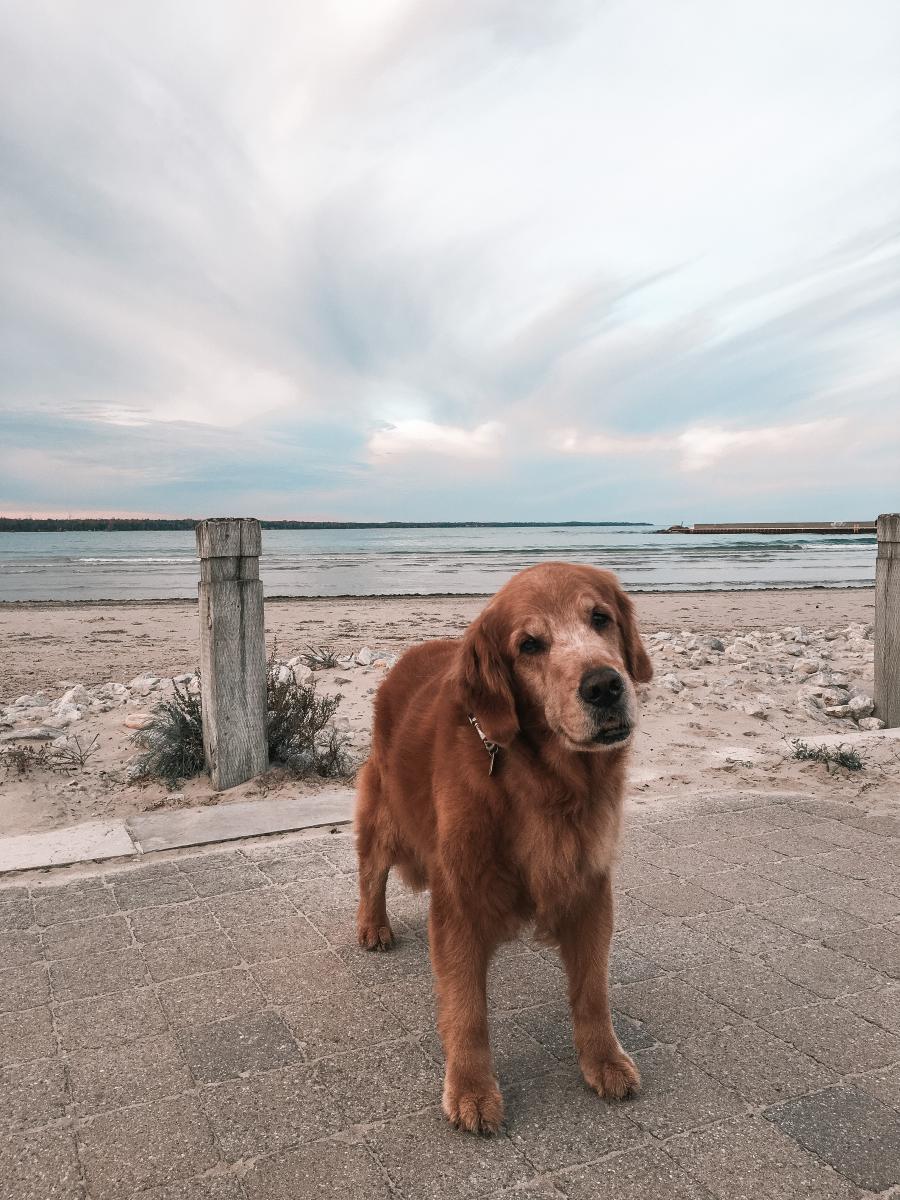 It’s February 2022, and outside Karen Hurlbut’s home in Port Elgin, Ontario, it’s a scene from a holiday greeting card. Trees are thickly coated with snow that has yet to drop away, and the air is still. It’s the kind of winter day Gus, Karen’s red golden retriever, would have loved best – and playing in the snow would have made an excellent story for his newsletter.

“Golden Retrievers are such happy, social creatures, and Gus had so much to offer everyone,” says Karen. She brought Gus home as a puppy at a critical point in her life, as she was struggling with the transition to retirement. Karen has never been one to sit around at home, and didn’t believe her dogs should either.

In his early years, Gus was always enrolled in one class or another. She knew a patient at Freeport, a campus of Kitchener-based Grand River Hospital, sometimes she brought him to visit. When Gus was five, she got him certified as a St. John Ambulance therapy dog.

“I’ve always loved the elderly, and I knew how much we could offer, but when we first started volunteering, I felt some anxiety,” says Karen. “Gus gave me self-esteem and confidence. I could do almost anything when he was there.”

At Freeport, Gus happily went where he was needed – playing balloon badminton one minute and climbing onto a bed where he could be stroked the next.

“I remember one patient who used to slide himself out of his wheelchair so he could sit on the floor with Gus,” says Karen. “He couldn’t speak clearly, and he was very proud when he taught Gus to hold something on his nose and balance it there. Gus made him feel understood.”

Gus was good at his job as a therapy dog. He brought comfort to many people. Then the COVID-19 pandemic struck, and visiting hours were over.

“I knew people would miss us terribly, so I started sending newsletters from Gus to Freeport every Tuesday and Thursday, the days we would have visited,” Karen says.

And, while much of the world came to a standstill, Karen says it wasn’t an option at her house. If they were going to send newsletters, she and the dogs needed to have something to write about.

“We didn’t have time to dwell on the pandemic because we had to keep busy doing things and taking pictures to go with our stories,” she says. “We never wrote about anything that was happening in the world, as far as politics or COVID, and we all appreciated having some good news in such a hard time.”

The newsletters – 113 in all – contained updates from Gus along with photos, trivia and puzzles. The staff at Freeport printed copies for the residents, and new contacts began to appear on the email distribution list, for individuals living as far away as Vancouver Island and Newfoundland. 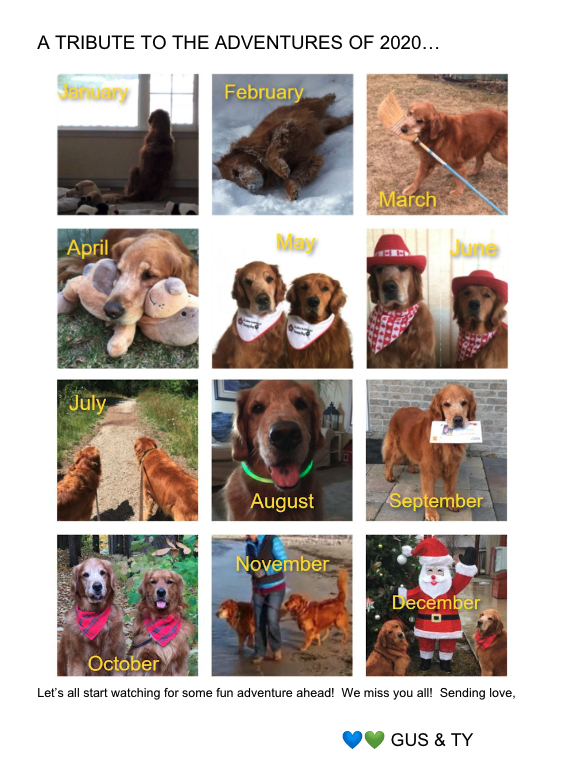 While it was Karen who typed the words, she says Gus was the real inspiration behind them, and his personality shone through. She says his brother Ty tried to write them a couple of times, but his heart wasn’t in it. Gus was the writer in the family.

“I couldn’t have done it alone. Gus was my muse,” she says.

Two days before Gus passed away in November 2021, he had an upset stomach, and Karen decided she would make an appointment at her veterinary clinic. The morning the clinic opened, she took the dogs for a short walk and let Gus choose the route. He guided them down a small hill, toward the beach. They took some pictures. But on the way home, Gus had a seizure. He died on his way to the clinic.

“It was unexpected, and strange,” Karen says. “Within half an hour of being at the beach, I was at home, and I no longer had my dog.”

She shared one final story about Gus with her email distribution list, and even during a most difficult time, Karen made the effort to highlight the positive: “Feet were wet and leashes were tight as Gus tried to drag me into the surf as he always does. We took some pictures too as the sky was beautiful with just a little bit of blue peeking through. About 15 minutes from when the photo on the left was taken, Gus had a seizure. I crouched next to his body and called my neighbour who came quickly, helped me lift limp Gus into his van. On route to the vet, Gus took his last two deep struggling breaths and passed.”

Today, Karen and Ty are still adjusting to life without Gus. While pandemic restrictions remain in place, she says they’ve returned to old-fashioned letter writing, and video chatting with friends. When it is safe, she hopes to return to Freeport. She has also scouted out new opportunities to visit with the elderly in their new community.

“I don’t know if we’re doing a good enough job of honouring Gus right now, but in time we will,” Karen says. “In the newsletter every week, we were trying to find something happy to write about. Gus taught everyone to find the joy in life. I have to keep doing that. It’s how we’ll honour Gus.”

When she and Ty go for walks, they stop to say hi to everyone, and they chat. They wave at people in windows. They look for moments of joy, even simple ones, like snowflakes hitting the window.

“Gus taught me the importance of getting involved, of giving what we can,” Karen says. “We have things to share, love and joy – and it all comes right back to us.”

Read an issue of Gus and Ty News from January 2021. 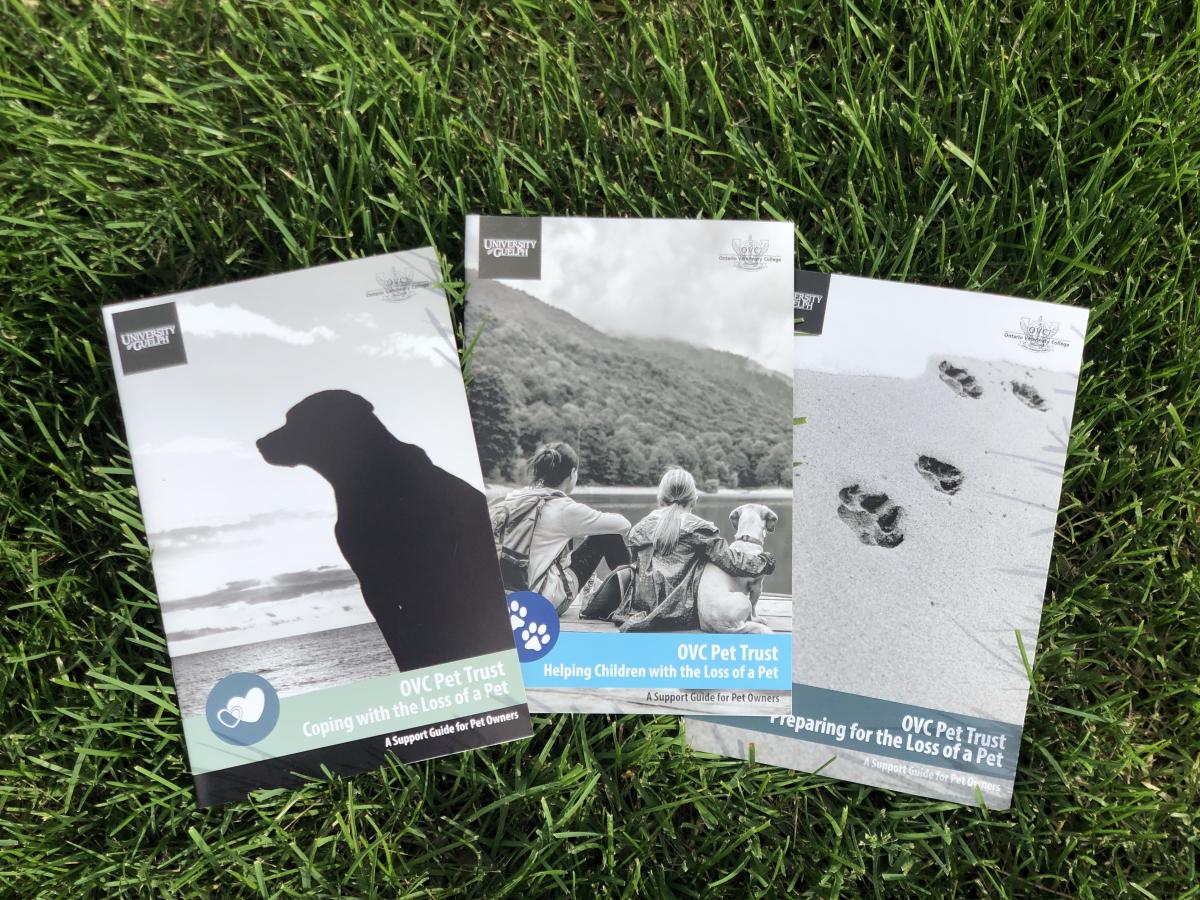 Dealing with and preparing for the loss of a pet can be difficult to navigate. Access FREE Pet Loss Support Resources created by OVC Pet Trust in collaboration with The Ohio State University Veterinary Medical Center to support those in need.

This story originally appeared in the spring / summer 2022 issue of OVC Pet Trust's Best Friends Magazine. Join our community and subscribe to the pet magazine of the Ontario Veterinary College.