A Shift in Focus 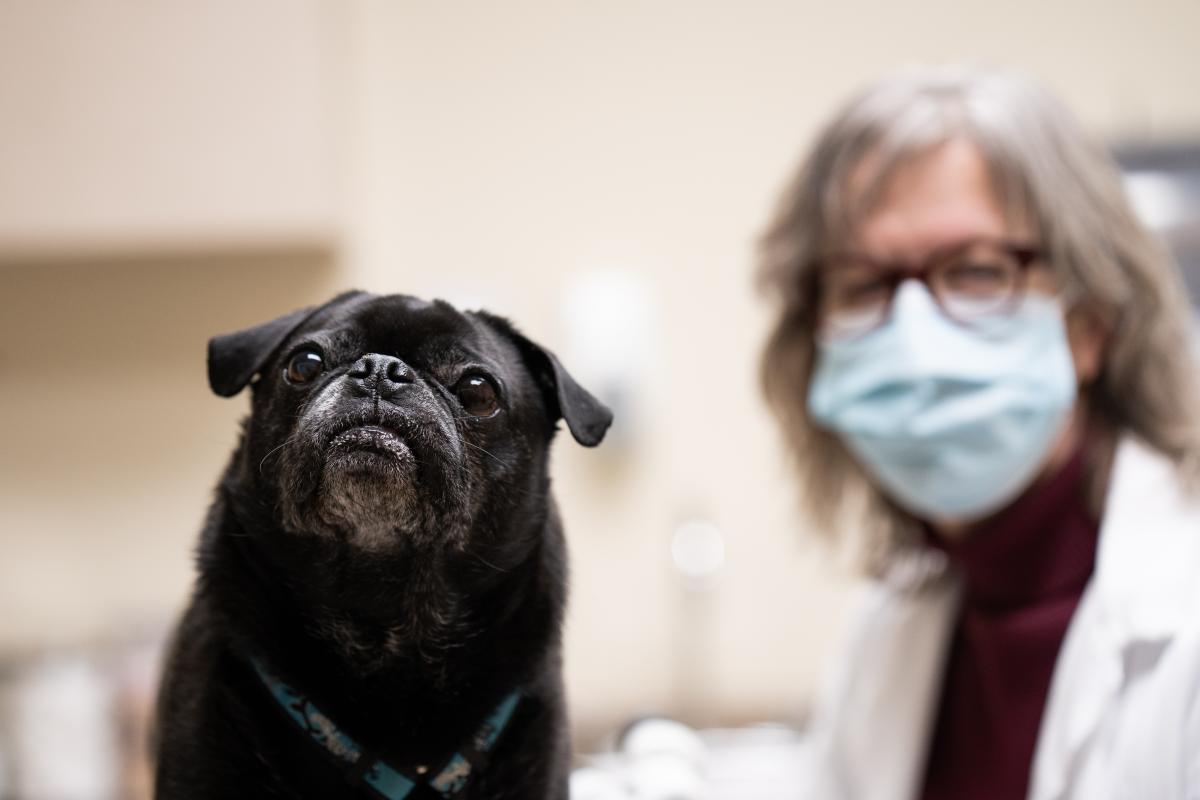 Amanda Mansz lovingly refers to her 11-year-old pug Boulez (pronounced Boo-les), also known amicably as ‘Boo’, as a determined, sweet and feisty dog. Boo found his forever home with Amanda in 2012 when he was 11 months old. In August 2021, Amanda noticed a deep crater in Boo’s eye. She took him to their family veterinarian who immediately recommended taking him to the Ophthalmology Service at the OVC Health Sciences Centre (HSC) as soon as possible.

In hindsight, Amanda says she knew that Boo was on the verge of disaster. After being referred to OVC as quickly as possible, Amanda and her family were faced with a big decision.

Boo was diagnosed with a complex corneal ulcer, a serious lesion of the cornea, the clear outer part of the eye. He was also diagnosed with keratomalacia, which means that the cornea had begun to disintegrate and “melt” due to infection and appears jelly-like. Boo was examined by OVC ophthalmologist Dr. Chantale Pinard and her team, and Amanda learned that she had a few options to consider to help her dog: she could make the decision for Boo to lose his left eye completely or opt to treat it medically and/or surgically. 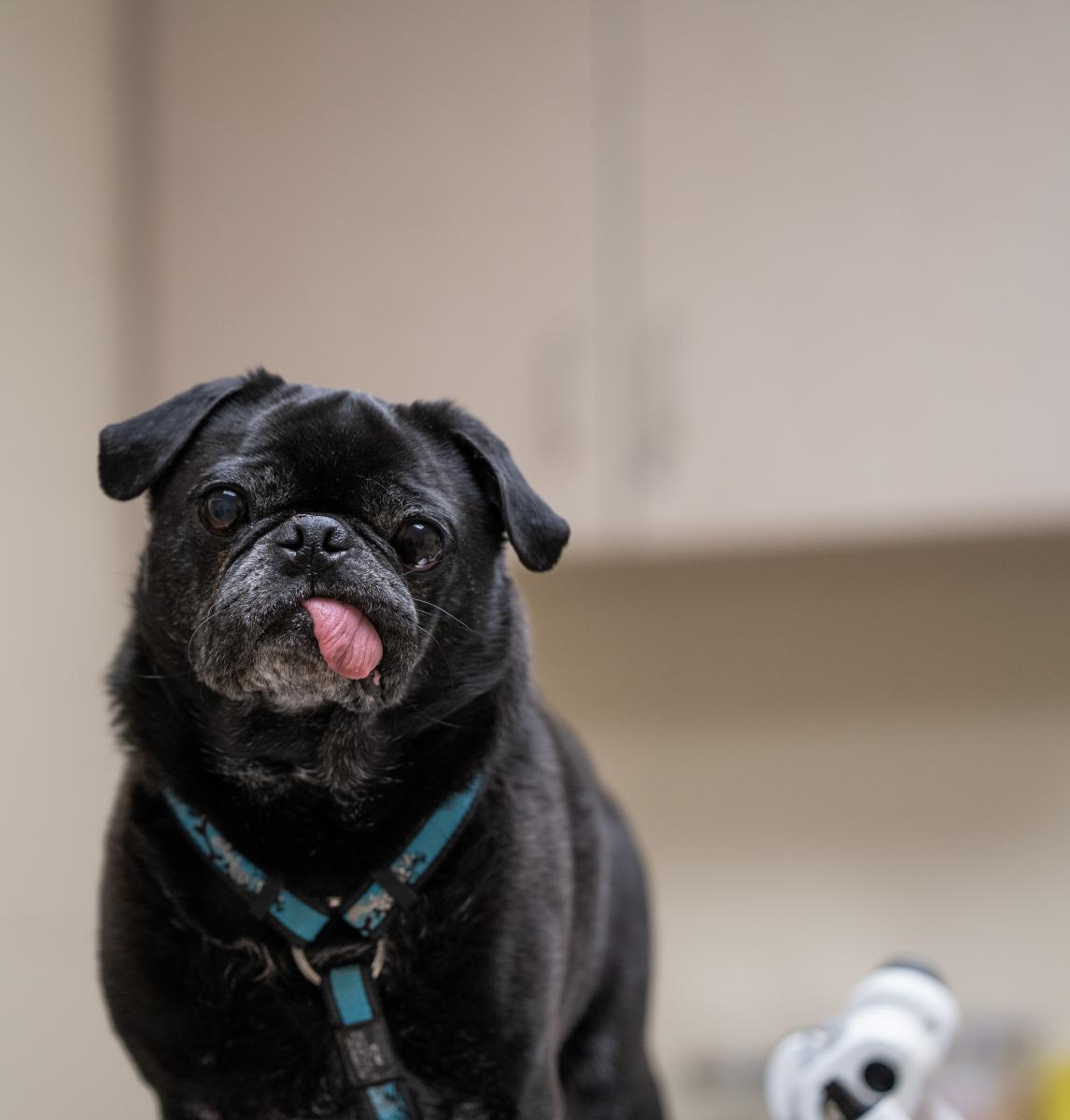 Surgery meant that Boo would have to go through a procedure called a corneal graft, an intricate and involved procedure that would be performed by Dr. Pinard in an operating room.

Even through her lens as a trained veterinarian, Amanda had never experienced anything like what she was about to go through with her beloved Boo.

Amanda is a trained veterinarian (OVC 2008) with advanced graduate training through a residency and Doctor of Veterinary Science program (DVSc) in anatomic pathology. She has worked at the Animal Health Laboratory at the University of Guelph since 2018. Her job includes day cases, which involves analyzing biopsies and samples from alive and dead small and large animals. Amanda also conducts post-mortem autopsies, and her caseload includes dogs, cats, horses, exotic animals and livestock (pigs, cows, goats and sheep).

Dr. Pinard says that corneal ulcers are one of the leading eye diseases in dogs. Dogs with prominent eyes such as pugs, shih tzus and Boston terriers are at higher risk than dogs that have a longer snout (nose) – such as retrievers, spaniels and shepherds. 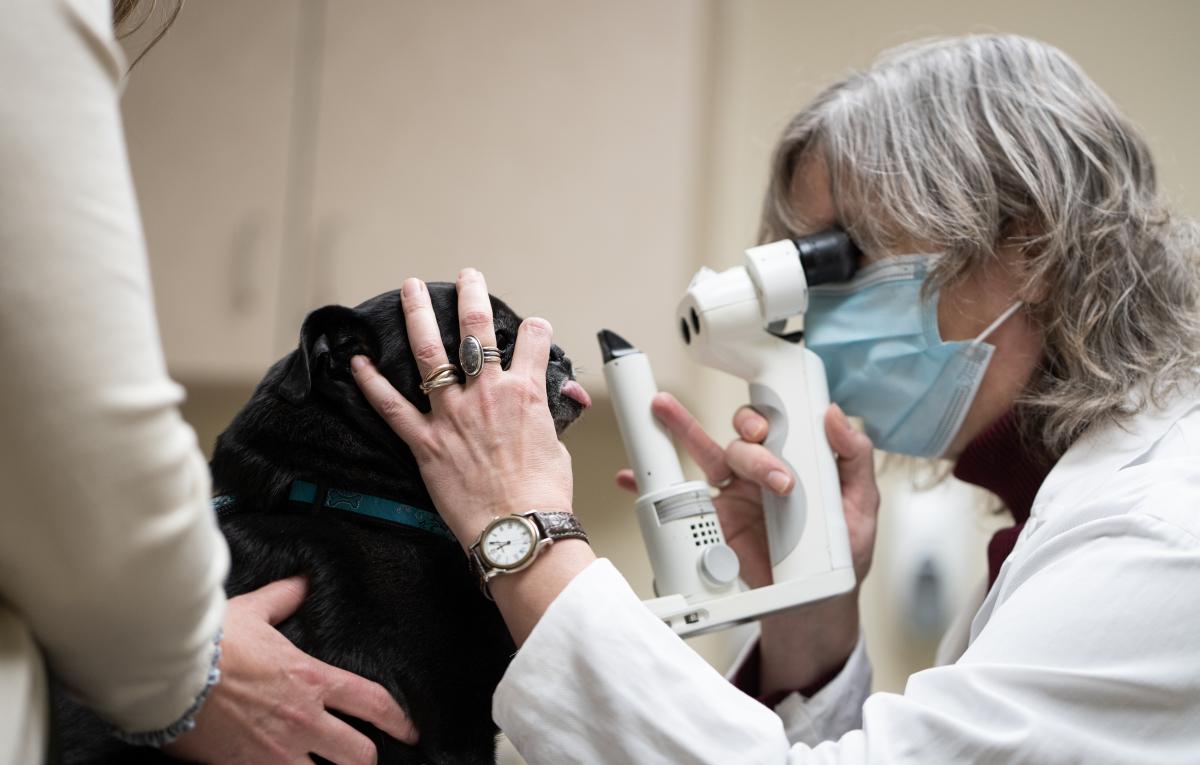 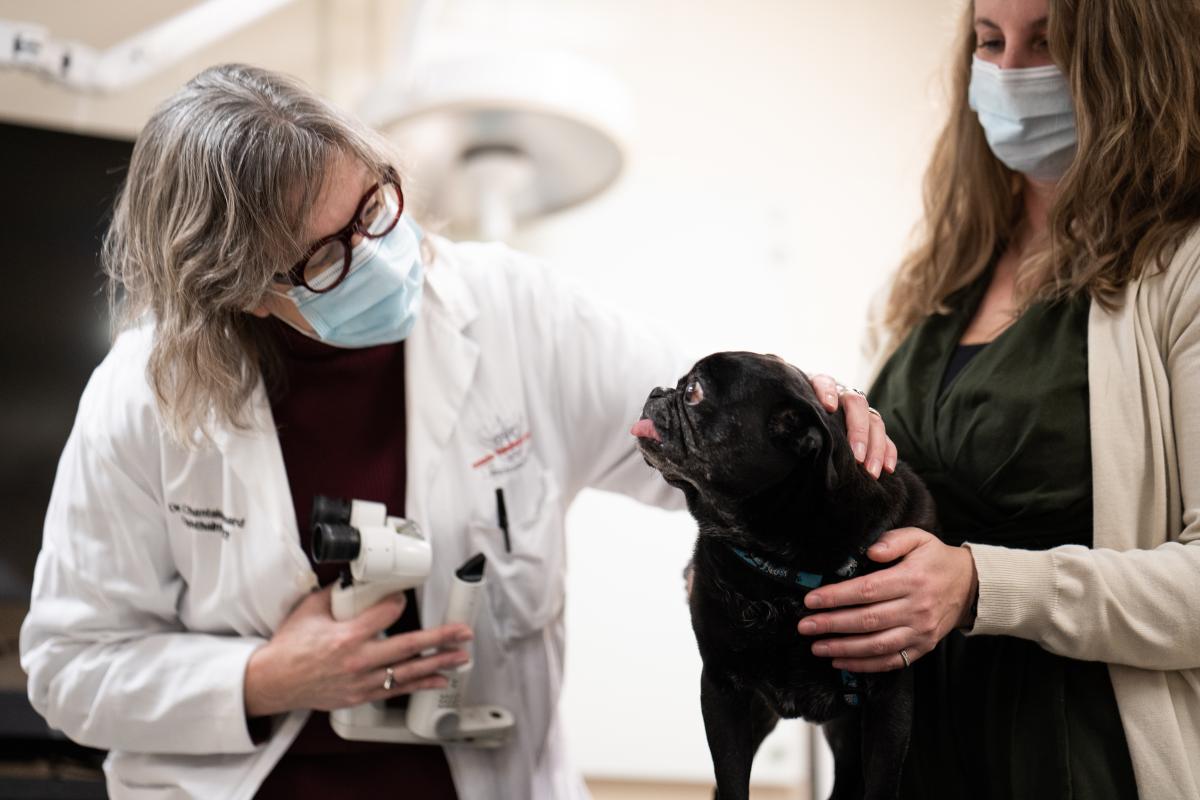 “Dr. Pinard and the team advised me that there was a chance that medication only would have solved the infection and Boo could have healed without surgery; but there was also an equal chance that the cornea would have ruptured due to its fragility during healing,” Amanda shares. Boo’s vision would have been compromised and the eye would have undoubtedly been a source of pain for the pug. He was immediately hospitalized in OVC’s intensive care unit (ICU) for rigorous medical therapy to prepare for surgery.

Surgery would not only increase the odds that Boo could keep his eye, but also shorten the medical therapy to two to three weeks; with all of the risks, medical therapy without pursuing surgery, can still take several weeks to months and the outcomes are not guaranteed.

In the ICU, Boo was placed on several medical interventions to stabilize his eye, treat his infection and manage his pain – all with the ultimate goal of maximizing surgical success. 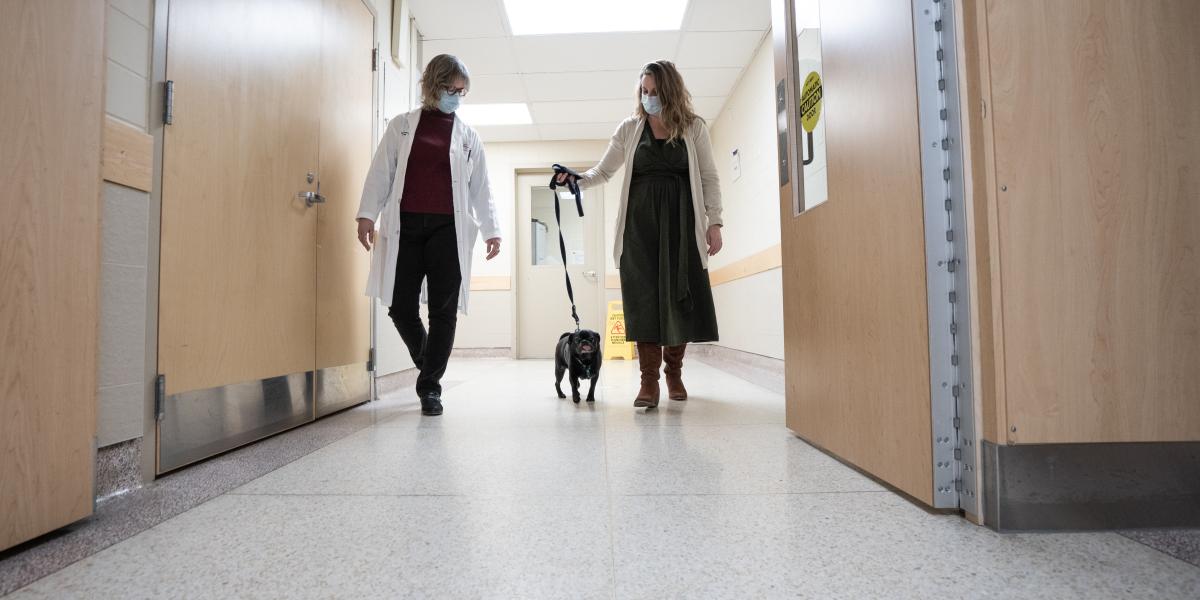 “If Boulez’s infection was still active at the time of surgery, the sutures used may not have held and the graft would be more likely to fail,” explains Dr. Pinard. “This aggressive medical therapy was only possible due to the presence of the ICU as most owners usually do not have the capacity to administer drops at such a frequency for 24 hours,” she adds, acknowledging the importance of integrated care at a tertiary care hospital such as the OVC HSC.

Boo had surgery with Dr. Pinard a day later.

Dr. Pinard surgically constructed a graft for Boo’s eye. The graft involved taking a piece of adjacent pink tissue around the eye (called conjunctiva) and manipulating it to cover the corneal lesion. Precision is key: under a microscope, the sutures that Dr. Pinard used to build the graft was thinner than a single strand of hair. Risk of complications during surgery was high and margins were very narrow to non-existent, with no room for error. Boo responded to medical and surgical therapy and was fortunately able to keep his left eye.

“Even though I have medical knowledge and training as a veterinarian, it was a whole different world for me to go through this experience as a pet owner whose dog needed urgent help,” Amanda says. “I didn’t know this surgery would even be an option for Boo.”

Boo came home two days after his surgery with an e-collar (cone) and strict instructions for rest as he recovered, which Amanda says was challenging with two other dogs and a young child at home, but necessary to prevent further eye trauma. Boo shares his home with Amanda’s husband and the couple’s two-year-old child as well as two other dogs: Cousteau, a 12-year-old pug mixed breed, also a rescue; and Bizet, a French Bulldog, rescued about five years ago. 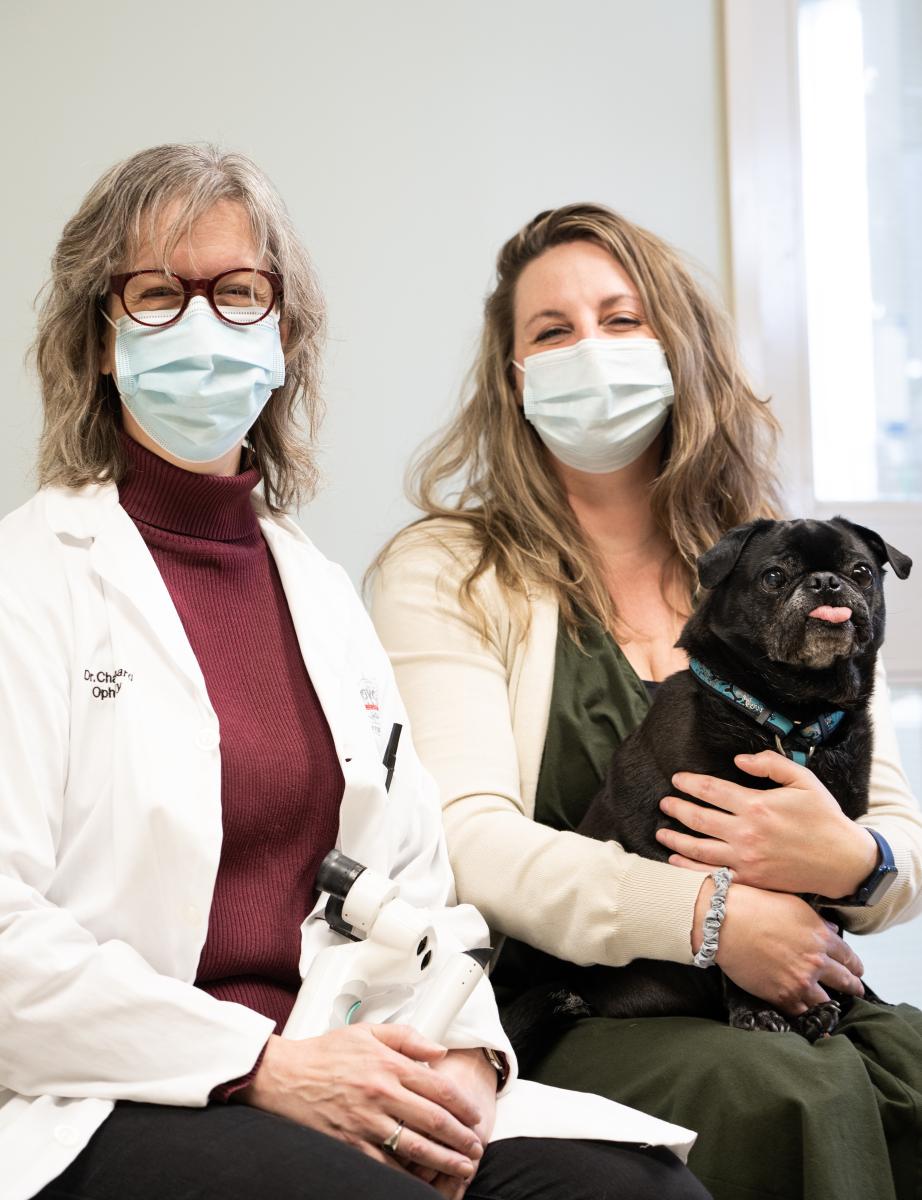 “OVC went above and beyond caring for Boo – the treatment he received was world class and the TLC he received was absolutely amazing,” Amanda says. “It was a nerve-wracking experience for our family to go through – especially with Boo being a pug, being under anesthesia has a higher risk – but I knew he was in the best possible place.”

“I am so grateful to Dr. Chantale Pinard – she walked me through the options for Boo, let me make my own decision and was there to support us no matter which route we chose. It was hard; but the time and care to explain all options, the risks associated with all choices and the compassion to know that I could ask questions if I needed to was so reassuring and comforting,” Amanda reflects. “The state of our [veterinary] profession is tough – veterinarians and specialists are under a great deal of pressure and are busier than ever right now,” she adds.

Dr. Pinard advocates that owners pay careful attention to their dogs’ eyes, especially if they notice issues or something out of the ordinary. She says, “If squinting or excessive blinking does not resolve within one to two hours and is accompanied by tearing, redness of the eye and a prolapsed (or protruding) third eyelid, prompt veterinary care should be sought out as the eyes and their associated tissues are fragile and may not forgive easily. Owners of dogs with prominent eyes, especially pugs and shih tzus, should be attentive to these signs and seek re-evaluation if the clinical signs do not improve within 24 to 72 hours. If the owner can see a visible crater or indentation in the cornea, seek immediate veterinary care.”

This story originally appeared in the spring / summer 2022 issue of OVC Pet Trust's Best Friends Magazine. Join our community and subscribe to the pet magazine of the Ontario Veterinary College.